The threats amphibians face are diverse, poorly understood, sometimes synergistic, and entirely caused by humans. Most threats are under our direct control and could, in theory, be mitigated in time to prevent further extinctions. However, other threats are not currently mitigable or cannot be mitigated in time to prevent additional extinctions. For example, the emergent infectious disease chytridiomycosis, caused by the fungus Batrachochytrium dendrobatidis (Bd), has already affected hundreds of species and has spread to every continent where amphibians are found. Even if we had the will to mitigate all the threats under our direct control, hundreds of species would still face probable extinction in the wild.

The Amphibian Ark focuses on ex situ programs for these species that cannot currently be safeguarded in the wild, and that will benefit, and in some cases, depend on conservation breeding programs in captivity for their survival. Successful ex situ conservation programs are generally those that are well thought-out, well-resourced and properly managed throughout the entire life of the program – that is, before the program is formally established, during the implementation phase, and then regular progress checks during the period that the population is being managed.

The key steps in implementing and managing ex situ programs are:

Each of these topics is covered in their own pages, so if you are considering implementing a new captive program for amphibians, we encourage you to click on the links above and read through this information.

While a number of very successful amphibian conservation programs have begun, and are currently underway without following all of these steps, the Amphibian Ark recommends that where possible, all these steps are followed, to ensure the best possible outcome for the population being managed. 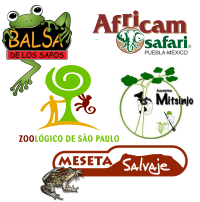