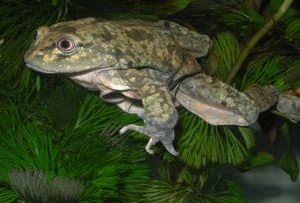 Habitat: This frog is fully aquatic (Allen 1922). Although it seems to prefer the bottom of the lake, it occurs throughout the water column and has been observed on rock ledges within two feet of the water surface (Hutchison et al. 1976).

Threats to survival: Lake Titicaca Frogs are being harvested—for human consumption. Titicaca Frog legs are popular on tourist menus around the lake, though the dish has recently become somewhat difficult to find. Still, some enterprising restaurateurs (many of whom are anglers) retain small ponds or tanks to display live frogs in hopes of enticing adventurous gastronomes.

Bolivia has no laws in place to protect Titicaca Frogs, and Peru does not protect them within the lake—but transporting the oversized amphibians is a criminal offense. During a single month in 1999, Peruvian law enforcement officials intercepted and repatriated over 4,500 live frogs on their way to city restaurants. Lately, the demand for Titicaca Frogs seems to be growing. According to a recent report on Peruvian National Television, 150 live frogs are required daily to satisfy Lima’s latest fad—frog juice, known locally as Rana y Maca. Live frogs are stripped of their skins like peeled bananas and dropped into a household blender. Mixed with water, maca (a local tuber) and honey, the juice’s prowess as an aphrodisiac is given great claim by locals who guzzle the concoction in a show of macho bravado. 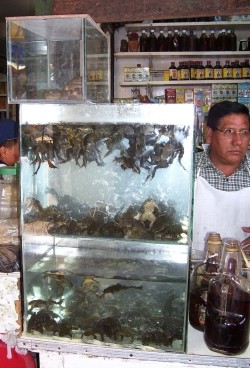 Titicaca Frogs have also been used in traditional medicine. Dried frog meat is said to cure tuberculosis. One treatment for a fracture requires tying a frog to the area as a poultice. A small live frog is swallowed whole to cure a fever. And soup made from a large frog is used to treat both anemia and female infertility.

Consumption is probably the biggest threat to the future of the Lake Titicaca Frog but there other issues that are not helping as well. The lake is far from its natural form through introduced species of fish, average temperatures from environmental change is on the rise and nonpoint pollution from human inhabitants surrounding the lake are creating a negative future for the species.

Interesting natural history notes: The Lake Titicaca Frog is the world’s largest aquatic frog. This species is endemic to its namesake lake. Against the backdrop of snow capped mountains, Lake Titicaca straddles 2,000 square miles of Peruvian and Bolivian landscape at 12,500 feet above sea level. Life at this altitude is adapted for extremes: high levels of ultraviolet radiation, freezing temperatures and oxygen depleted air. Titicaca Frogs survive here and nowhere else.

It does not surface for air if the water is well-oxygenated, although dissections have shown small amounts of gas in the lungs (Hutchison et al. 1976). This species is able to effectively remove oxygen from water with its skin (Hutchison et al. 1976). Lungs are reduced and poorly vascularized; respiration appears to take place primarily through the large and highly vascularized skin folds hanging from the dorsum, sides and hind limbs (Macedo 1960). Other adaptations for aquatic life at high altitude include one of the highest red blood cell (RBC) counts reported for any anuran (see Ruiz et al. 1983 for a comparison), one of the smallest red blood cell volumes reported for any anuran (see Ruiz et al. 1983 for comparisons between species), a relatively high oxygen capacity, and a relatively high hemoglobin content (Hutchison et al. 1976). Under hypoxic conditions, the frog will surface; if it is prevented from surfacing, it does not struggle but stands on the bottom with legs and toes extended to maximize skin surface exposure to the water, and will bob up and down about once every six seconds (Hutchison et al. 1976). This acts to move the large skin flaps, which breaks up the boundary layer between the skin and the water, allowing the skin to more fully absorb the limited oxygen from the water (Hutchison et al. 1976).

This species has the lowest reported metabolic rate (14.1 microliters/gram-hour) under non-hypoxic conditions for any frog, and one of the lowest among all amphibians; only a few salamander genera have lower metabolic rates (Hutchison et al. 1976). This rate is likely to be an overestimate, as it was measured at low altitude in captive frogs and not at the elevation of the natural habitat in Lake Titicaca (Hutchison et al. 1976). An extremely low metabolic rate is likely to be the case for other species in the genus Telmatobius as well (see Ruiz et al. 1983).

In situ projects currently underway: Denver Zoo along with international and local partners is involved in ongoing research of the Lake Titicaca Frog. (Telmatobius culeus). In fall of 2010 pilot studies for a mark and recapture population survey along with DNA biodiversity and prevalence of Chytrid, will begin. Denver Zoo also participates in national awareness campaign to decrease the consumption of Lake Titicaca Frogs.

Ex situ programs: Currently, there is a Telmatobius Captive Breeding Program and Laboratory at the Universidad Peruana Cayetano Heredia in Lima, Peru. There are plans to open another facility at the lake through partnership with PELT (Proyecto Especial del Lago Titicaca) in 2011. The focus of these laboratories is to learn more about the species captive husbandry, achieve captive propagation. In order to support an assurance population. Lima’s Huachipa Zoo opened an amphibian crisis exhibit in August 2010 where Lake Titicaca frogs can be seen on exhibit. The exhibit includes important messaging about the frog’s status and threats to their survival.