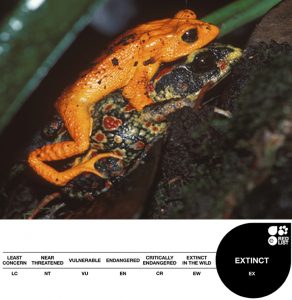 The best estimate of the global grand total of amphibian extinctions since the 1970s and 1980s is roughly 200 extinctions. Frog losses are heavy in Latin America, which has been greatly affected by the pathogenic chytrid fungus Batrachochytrium dendrobatidis. Extinction rates are now four orders-of-magnitude higher than background, and at least another 6.9% of all frog species may be lost within the next century, even if there is no acceleration in the growth of environmental threats. (Extinction rates of reptiles and amphibians, John Alroy. Proceedings of the National Academy of Sciences Oct 2015, 112 (42) 13003-13008; DOI: 10.1073/pnas.150868111. www.pnas.org/content/112/42/13003).

500: estimated number of amphibian species whose threats currently are unlikely to be mitigated quickly enough to prevent extinction, i.e., those that require ex situ intervention.

4,168 Conservation Needs Assessments now completed for 3,511 species in workshops for 48 countries. These assessments allow us to maximize the impact of limited conservation resources, and to guide the development of national and species-level action plans.

According to satellite data, tropical forests are being destroyed at a rate of about 8 million hectares (31,000 square miles) a year — an area equivalent in size to the state of South Carolina or the Czech Republic. (Conservation International, 2020. www.conservation.org/stories/11-deforestation-facts-you-need-to-know).

Despite their immense value, since the 1960s, nearly half of the world’s rainforests have been lost. Every day, about 81,000 hectares (200,000 acres) of rainforest — an area nearly 14 times the size of Manhattan — are burned around the world.​ (Conservation International, 2020. www.conservation.org/stories/11-deforestation-facts-you-need-to-know). 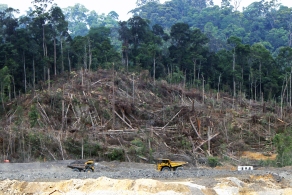 Indonesia has the highest deforestation rate in the world, losing 15 million acres of forest between 2000 and 2012. (Conservation International, 2020. www.conservation.org/stories/11-deforestation-facts-you-need-to-know).

10%: portion of amphibian species threatened with extinction that the global zoo community, universities and private conservation organizations is at best currently prepared to manage.

1: the number of amphibian species for which each of the 500 largest WAZA zoos and aquariums must take responsibility as a stopgap to stem the losses.