END_OF_DOCUMENT_TOKEN_TO_BE_REPLACED

Amphibian Ark recently coordinated a special event to reveal the scientific name of a new Ecuadorian frog named after Charles, Prince of Wales, to honor his remarkable efforts to protect rainforests around the world. The event took place at his Highgrove House on 5 July and included presentation of a commemorative medallion from the Royal Mint, and Frabel Glass Art Studio and Gallery made a glass sculpture of the frog. Hans Godo Frabel came to the US from West Germany in 1965 and founded the Frabel Studio in 1968. His glass art is internationally known and collected by thousands around the world including museums, presidents, royalty, celebrities and art collectors. I became acquainted with Hans Godo Frabel and the Frabel Glass Studio in Atlanta back in about 2007 during an exhibit of their wonderful work in the Fuqua Conservatory at the Atlanta Botanical Garden. After learning more about the conservation work that the Garden was doing with orchids and amphibians, the Frabel team set out to render fantastic, life-size and styled works of some of the endangered frog and orchid species in the collections at the Garden. These were featured in a special exhibit in the Fuqua Conservatory and as their popularity grew, they were made available for purchase with the proceeds going directly into conservation. The program was highly successful and thus, quite helpful to the efforts. The Garden is forever grateful to Frabel’s president Kevin op de Ehze for his efforts without him this collaboration would not have happened. 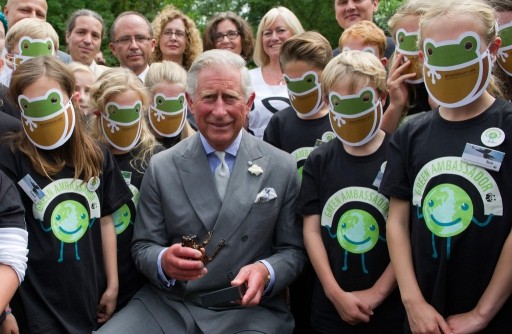 END_OF_DOCUMENT_TOKEN_TO_BE_REPLACED

Frogs, toads and other amphibians are among the most beautiful creatures on the planet. They are instantly recognisable to most people, and to many, they hold a deep fascination. They occupy a wide range of land and water habitats, on every continent except in Antarctica.

For many people who live in ever-expanding large cities, access to wildlife in their surrounding areas is becoming rarer and rarer. Our cities and the increasing encroachment on forests for agriculture are having a huge impact on the decline of our wildlife, including our precious amphibians. Unfortunately, there are more and more of our children who only experience wildlife in zoos, on television, and through photographs in books and magazines. I am a firm believer of the powerful impact of beautiful photographs and images, and that when presented with succinct information about these species they can help to further raise awareness about the plight of amphibians.

I have spent much of my life bringing images of the Earth’s astounding wildlife into the homes of many people around the world, I am delighted to endorse the Amphibian Ark’s photography competition. As the saying goes “A picture paints a thousand words”, and I would urge you to contribute your amphibian photos to this worthy competition. Imagine the impact that your photos, along with messages about saving this threatened class of animals will have, when they feature in Amphibian Ark’s 2012 calendar.

By participating in this event, you will help raise awareness of the plight the world’s amphibians and play an important role in helping to save them.

END_OF_DOCUMENT_TOKEN_TO_BE_REPLACED

The University of British Columbia, the University of Victoria, and the city of Vancouver will host the 7th World Congress of Herpetology (WCH) in beautiful British Columbia from 8-14 August 2012. Vancouver has a magnificent setting on the Pacific Ocean, is a world-class conference city and offers a wealth of scientific resources and entertainment. More information is available on the web site, http://www.worldcongressofherpetology.org/

END_OF_DOCUMENT_TOKEN_TO_BE_REPLACED

DAR ES SALAAM, Tanzania and NEW YORK — When it came to a choice between a hydropower dam that would provide electricity to one-third of Tanzania and a tiny endangered toad, the dam won.

But the Kihansi toad lives on thanks to the efforts of Tanzania and two American zoos.

One hundred of the critically endangered Kihansi spray toads, bred in laboratories in the United States, were returned to Tanzania last week where they will live in the area for the first time in 10 years.

END_OF_DOCUMENT_TOKEN_TO_BE_REPLACED

Abstract
Batrachochytrium dendrobatidis is one of the most pathogenic microorganisms affecting amphibians in both captivity and in nature. The establishment of B. dendrobatidis free, stable, amphibian captive breeding colonies is one of the emergency measures that is being taken to save threatened amphibian species from extinction. For this purpose, in vitro antifungal susceptibility testing and the development of effi cient and safe treatment protocols are required. In this study, we evaluated the use of amphotericin B and voriconazole to treat chytridiomycosis in amphibians. The concentration at which the growth of fi ve tested B. dendrobatidis strains was inhibited was 0.8 μ g/ml for amphotericin B and 0.0125 μ g/ml for voriconazole. To completely eliminate a mixture of sporangia and zoospores of strain IA042 required 48 h of exposure to 8 μ g/ml of amphotericin B or 10 days to 1.25 μ g/ml of voriconazole. Zoospores were killed within 0.5 h by 0.8 μ g/ml of amphotericin B, but even after 24 h exposure to 1.25 μ g/ml of voriconazole they remained viable. Amphotericin B was acutely toxic for Alytes muletensis tadpoles at 8 μ g/ml, whereas toxic side effects were not noticed during a seven-day exposure to voriconazole at concentrations as high as 12.5 μ g/ml. The voriconazole concentrations remained stable in water during this exposure period. On the basis of this data, experimentally inoculated postmetamorphic Alytes cisternasii were sprayed once daily for 7 days with a 1.25 μ g/ml solution of voriconazole in water which eliminated the B. dendrobatidis infection from all treated animals. Finally, treatment of a naturally infected colony of poison dart frogs (Dendrobatidae) using this protocol, combined with environmental disinfection, cleared the infection from the colony.

END_OF_DOCUMENT_TOKEN_TO_BE_REPLACED

Background
Significant shifts in climate are considered a threat to plants and animals with significant physiological limitations and limited dispersal abilities. The southern Appalachian Mountains are a global hotspot for plethodontid salamander diversity. Plethodontids are lungless ectotherms, so their ecology is strongly governed by temperature and precipitation. Many plethodontid species in southern Appalachia exist in high elevation habitats that may be at or near their thermal maxima, and may also have limited dispersal abilities across warmer valley bottoms.

Methodology/Principal Findings
We used a maximum-entropy approach (program Maxent) to model the suitable climatic habitat of 41 plethodontid salamander species inhabiting the Appalachian Highlands region (33 individual species and eight species included within two species complexes). We evaluated the relative change in suitable climatic habitat for these species in the Appalachian Highlands from the current climate to the years 2020, 2050, and 2080, using both the HADCM3 and the CGCM3 models, each under low and high CO2 scenarios, and using two-model thresholds levels (relative suitability thresholds for determining suitable/unsuitable range), for a total of 8 scenarios per species.

Conclusion/Significance
While models differed slightly, every scenario projected significant declines in suitable habitat within the Appalachian Highlands as early as 2020. Species with more southern ranges and with smaller ranges had larger projected habitat loss. Despite significant differences in projected precipitation changes to the region, projections did not differ significantly between global circulation models. CO2 emissions scenario and model threshold had small effects on projected habitat loss by 2020, but did not affect longer-term projections. Results of this study indicate that choice of model threshold and CO2 emissions scenario affect short-term projected shifts in climatic distributions of species; however, these factors and choice of global circulation model have relatively small affects on what is significant projected loss of habitat for many salamander species that currently occupy the Appalachian Highlands.

END_OF_DOCUMENT_TOKEN_TO_BE_REPLACED

The New Zealand government has caved to public pressure, announcing that it is dropping all plans to mine in protected areas. The plan to open 7,000 hectares of protected areas to mining would have threatened a number of rare and endemic species, including two frogs that are prehistoric relics virtually unchanged from amphibian fossils 150 million years old: Archey’s frog (Leiopelma archeyi) and Hochstetter’s frog (Leiopelma hochstetteri).