My name is Carlos Andrés Galvis Rizo. Ever since I was a child and for as long I can remember, I have been passionate about all animals. My father was also a lover of nature and motivated me tremendously to become a biologist. He often gave me books and video documentaries about animals as gifts which further inspired my fascination about fauna, and especially amphibians and reptiles. I was very fortunate to be born and grow up in a tropical country like Colombia, and frequently I made trips to rural areas with my father, during which time my enthusiasm grew increasingly to someday pursue university studies enabling me to become a biologist. 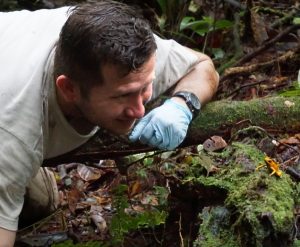 To be able to share my life’s work and passion of conservation of our natural resources with others brings me an enormous sense of personal satisfaction.

Shortly after beginning my studies at the university, I started working as Curator of the reference collection of amphibians and reptiles at the Universidad del Valle where I remained throughout the length of my time as a student. During this same period I was also connected with the Conservation Research Center (CREA) of Cali Zoo where I led some of the research and conservation programs pertaining to amphibians and reptiles. After completing my studies I was appointed as Biologist of the Cali Zoo, where I was able to continue my conservation activities. It was then that I assumed the responsibility as head of the animal collection department. In 2008, I received a grant from the Durrell Wildlife Conservation Trust to continue my studies in the United Kingdom. It was there that I obtained an Honors degree in Management of Threatened Species Conservation from the University of Kent. From the knowledge I acquired, I had a much clearer understanding about the important role of zoos in conservation and the appropriate strategies necessary to help save species from extinction. A few years later, I was awarded a scholarship by the Zoo Conservation Outreach Group (ZCOG) to pursue coursework in biology and management and conservation of amphibians in Toledo, Ohio. It was there that I acquired knowledge on amphibian management techniques in captivity and other aspects related to amphibian conservation. Throughout this period the Cali Zoo had continually supported my training efforts as a scientist and my initiatives to promote the conservation of natural resources.

From the start of my affiliation with the Cali Zoo in 1999, I initiated a snake conservation program which had allowed me to generate important associations within the rural communities of Colombia. These connections enabled me to access many areas of our country that were often difficult for many other scientists. It can be said that it was because of my work with the snakes that many doors had been opened for me; enabling me to contribute to the conservation of other animals, especially amphibians.

During one of my field expeditions in which I was working with snakes in the Colombian Pacific rainforest, I unexpectedly found a new population of Golden Poison Frog (Phyllobates terribilis). This discovery was very significant because it extended the range of distribution of these animals 60 km north from its known distribution location. From this sighting and with the support of Wildlife Conservation Society (WCS, USA), the Zurich Zoo in Switzerland, and the Universidad del Valle, studies are now being conducted that will inform us much more extensively about their conservation status and the development of new strategies to prevent their extinction.

From the studies conducted by the scientific community pertaining to endangered species of Colombia and a prioritization workshop conducted at the Cali Zoo and guided by Amphibian Ark, which brought together many amphibian experts, it had been determined that the Lehman Poison Frog (Oophaga lehmanni) is also a Critically Endangered species that required a breeding program for reintroduction and population supplementation. Consequentially, with my encouragement and guidance, we recently initiated a breeding program at the Amphibian Reproduction Center at the Cali Zoo for this species.

Recapitulating these events in my life has enabled me to see how fortunate I am to watch how my childhood dreams became a reality. To be able to share my life’s work and passion of conservation of our natural resources with others brings me an enormous sense of personal satisfaction.

Currently we are continuing our studies with regard to the conservation of the Golden Poison Frog from the newly discovered population, at our Amphibian Reproduction Center. We have also continued our efforts on the current conservation needs of the Lehman Poison Frog. We have an extraordinary team of knowledgeable and dedicated veterinarians, biologists, curators and keepers at the Cali Zoo. Going forward, we hope to continue generating contributions to the awareness and conservation of other amphibian species in our country.