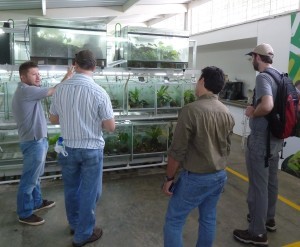 Please note: If you are not directly involved with captive conservation programs for amphibians, we ask that you consider searching for any information you need on our web site, or using an internet search engine rather than contacting the people below. Due to their existing workloads, these people are unable to answer emails that are not from people involved with captive amphibian programs. Please consider using these other resources to find the help you need: Amphibian Husbandry, Chytrid Fungus, AArk Documents, Amphibians on the Web.

I read Biological Sciences at Magdalen College, University of Oxford between 2007-2010 and specialised in zoology, conservation, and epidemiology, for which I received a first class degree. I then won a Natural Environment Research Council (UK Government) funded PhD studentship at the University of Manchester, where I researched amphibian ex-situ conservation between 2 010 and 2014, publishing research on UVB provision, nutrition, enrichment and other areas of captive husbandry. During this period I also taught undergraduates in a number of settings in the laboratory, lecture theatre and the field.

I now work as a Senior Keeper in the Herpetology Section at ZSL London Zoo. In this role, I specialise in the care of amphibians and in developing husbandry protocols for a number of poorly known species including caudates, caecilians and anurans. This includes species of conservation importance, such as Mountain Chicken frogs and Lake Oku clawed frogs. I am also involved with the EDGE programme at ZSL, where I have advised and taken part in several amphibian-focussed field projects, in particular Mexican ambystomatid salamanders. I am a founder of, and member of the steering committee for, the Amphibian Conservation Research Symposium, the leading international amphibian conservation research event for both scientists and conservationists.

I have been involved in field work in several parts of the world, including South-East Asia, South and Central America and Europe.

I have a particular interest in caudate captive husbandry and have extensive experience maintaining, breeding and raising a wide variety of species of this group.