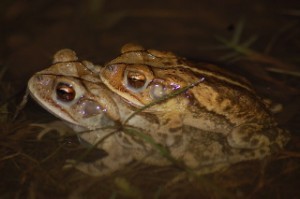 Distribution: Found in a wide variety of habitats along the Gulf Coastal Plain from central Veracruz, Mexico, northward to north-central Texas and extending eastward into southern Louisiana and extreme south-western Mississippi.

In urban environments, they are found frequently under concrete slabs and gathered in groups in cracks and holes under sidewalks (Awbrey, 1963; Moore, 1976). During the day, Coastal-Plain Toads seek cover and can be found under logs, other cover objects (personal observations), or in rodent burrows (Wilks, 1963). Neill and Grubb (1971) found Coastal-Plain Toads from 2–5 m above the ground in oak trees; they can be considered arboreal in that individual toads will find tree holes and may use them repeatedly for periods of weeks. In Texas, individuals have been found at the mouth of caves and, in one case, well down in a cave system (see Reddell, 1970).

This species does not appear to be adversely affected by alteration of native vegetation or by invasion of non-native vegetation. Adults may be found in vegetated areas of coastal barrier islands within 30 m of saltwater (personal observations). Timber harvesting practices at a site in southeast Texas did not affect overall abundance of toads (Foley, 1994).

Threats to survival: Coastal-Plain Toads are widespread and common throughout their range. They are adaptable and seem to tolerate habitat alterations caused by humans. In Mexico, they are more common in secondary habitats rather than primary forest habitats, suggesting that this species may expand its range or increase in local density following disturbance. Coastal-Plain toads are found in a wide variety of habitats, including suburban and urban areas, and are commonly seen in suburban areas foraging for prey on lawns and under streetlights. They are also found in railroad ditches or roadside pools, garbage dumps, and storm sewers (McAllister et al., 1989; personal observations). All of these observations suggest that Coastal-Plain toads are in no need of special protection. (taken from Amphibiaweb.org).

Reproductive behaviour: Reproduction is aquatic. Coastal-Plain Toads breed in many varieties of still water, and their reproductive biology is generally similar to that of other north-temperate species of Bufo.

In situ projects currently underway: In the Toad Trackers Conservation Education Program at Houston Zoo, program, students are introduced to the equipment a field biologist would use in their research and some of the methods used in the scientific study of animal populations. In an evening class, students actively search for Bufo nebulifer on zoo grounds for processing and data collection. The students collect data ranging from morphological to geographic.

On select nights (warm and wet) on zoo grounds, under supervision of the Education and Conservation departments, participants perform a toad round-up, collecting every toad that can be found. Students weigh, measure, determine gender, note any mutations of each toad and record its GPS coordinates. A trained teacher or conservation biologist at the Zoo then inserts a pit tag into each toad and the student releases it at the point of capture. Subsequent toad round ups during the same or following year provide data (through the ability to individually recognize toads) on growth rates, reproductive events, and movement patterns.

The program is also a forum in which students are educated about global amphibian extinctions and why monitoring local amphibian populations are important to detecting declines in our own region. Additionally, the data collected through this project could be used to publish a peer-reviewed paper on the Coastal Plains Toad based on the work of citizen scientists.

Ex situ programs: The species does not require conservation breeding programs at this stage.

How can we help this species? Refrain from using fertilizers and pesticides in urban lawns and gardens. Protect urban wetlands. Drive cautiously on rainy nights.