An unexpected beginning
It will be forty years next year since a trek into the high Venezuelan mountains resulted in an interesting finding. A Doberman pup was playing with something among paramo rosette plants, and it turned out to be a small frog. I took it to the University of Los Andes at Merida city, where I was pursuing an undergraduate degree in biology. There, I realized the specimen belonged to an undescribed species (that I later named Eleutherodactylus colostichos). About fifteen days later, I traveled to another location and found two more frogs that were also undescribed (and later described the species as Colostethus molinarii). The next specimens (caught seven months later) upon further study required a change from their sub-species designation to a full species designation.  One year later, I had a total of twenty collected specimens, of which three were undescribed taxa; and just one more year there were five new species in a small collection of about thirty specimens! What a way to forcibly deviate from my original desire to be a student of human behavior through the understanding of animals, to become a herpetologist. 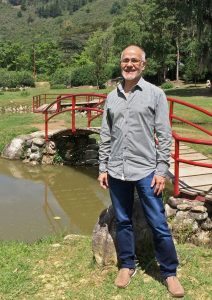 A chance encounter with a small frog led me to deviate from my original desire to be a student of human behavior through the understanding of animals, to become a herpetologist.

A life´s passion
In 1980, just three semesters before graduation, I decided to move to the USA, where I ended up studying at the University of Colorado in Boulder under the mentorship of Dr. Hobart M. Smith. He was one of the most influential people in my herpetology career, through his teachings, friendship and professional guidance. My first two papers, as an undergraduate, are co-authored with him. He recommended that I continue studying in the States, and put me in contact with Dr. John D. Lynch, who led me to finish a Master’s thesis on an amphibian group that I later named as a new genus (Mannophryne).  Later on, Dr. Lynch mentored my doctoral studies and dissertation on the biogeography of frogs (taxonomy included) from the Venezuelan Andean Cordillera de Merida.

I became a full professor at the University of Los Andes in Venezuela, lecturing mainly on biogeography. But my interest in herpetology never decreased. I continued participating in field trips that took me to even the most remote corners of the country (although most collections came mainly from the Andean region) and amassed a large number of specimens that were the basis to establish a herpetological collection (the Biogeografía de la Universidad de Los Andes, ULABG) that currently holds about 8,000 specimens. In 2004, I founded an international journal on tropical amphibians and reptiles (Herpetotropicos). The journal ran for ten years but unfortunately closed due mainly to a huge shortage of funds that have affected the whole national science apparatus until now. Additionally, I am thankful that this life´s passion has taken me to more than twenty countries through the Americas, Caribbean, Europe and Africa, mainly participating in field trips and attending congresses and other meetings. This passion is also reflected in my writing of seven books and more than 230 scientific papers. To date, my taxonomic work has led me to describe thirty-two new species of frogs, three lizards and seven snakes.

A twist of interests
Having first-hand knowledge of frog populations of the Venezuelan Andes was crucial to detect declines. Consequently, in 1991 I wrote a pioneer paper highlighting population changes in all Atelopus species known from the Cordillera de Mérida and postulated possible causes of the declines. I became a member of the IUCN Amphibian Specialist Group of experts in 1995. Since then, I dedicated efforts to categorize Venezuelan frog species to include threatened taxa into the Venezuelan Red Data Book. In 2002, I got involved with the Research and Analysis Network for Neotropical Amphibians (RANA) heading two conservation projects, mainly on Atelopus, but also on dendrobatid frogs. Later on, in 2004, I participated in the Global Amphibian Assessment, analyzing the distribution and conservation status of all of the Venezuelan amphibian species known to date, aiming to better understand their threats for later implementation of actions to protect them and provide appropriate conservation management.

The time was ripe to initiate a Venezuelan conservation program for endangered herp species. Under the auspice of the Venezuelan NGO Biocontacto, I recently founded the Venezuelan Andean Reptile and Amphibian Conservation Center. The financial support of Amphibian Ark has been germane to initiate there some conservation actions on frog species of the genera Mannophryne, Leptodactylus and Aromobates. A regional team has been developed through training personnel, and actions are now headed to organize workshops and to create public conservation awareness on endangered frogs. We have already developed husbandry and breeding protocols for one species, and have started to develop others. These ex situ experiences are unique in Venezuela in terms of their goals and results and are important to the conservation of threatened frog species.