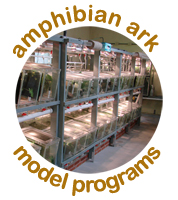 Amphibian Ark considers that there are two steps which are vital in any good ex situ conservation program, especially those that might eventually involve release back into the wild:

Where possible, all amphibian programs that will ultimately result in reintroduction or translocation programs should be operated within the native range of the species. Maintaining these populations within the range country generally results in lower disease risks than programs that are located outside the native range of the species. This helps to reduce the risks of introducing non‐native pathogens into the environment around the facility holding the amphibians, and the possibility of introducing novel local pathogens to amphibians that are collected and housed outside of the range country. The lowest risk situation for introduction of a significant infectious disease to wild amphibian populations as the result of a reintroduction program is when survival assurance populations are located within the native country of the species or species assemblage AND the facility keeps only amphibians from inside the native country (Pessier and Mendelson, 2010).

Amphibians used in translocation or reintroduction programs should be kept in long-term isolation from amphibians that are from outside of the native range of the species that will be reintroduced. This process of isolation is especially important for institutions that want to participate in amphibian conservation programs, but that have amphibian collections that are mixed or “cosmopolitan” (e.g., amphibians from multiple geographic locations are housed in one facility). Mixed amphibian collections increase the risk of the introduction of a significant infectious disease to wild amphibian populations as the result of a reintroduction program since the population being managed may be exposed to animals with infectious diseases not already present in the captive population. In general, amphibians that have been held in situations without appropriate biosecurity practices are not suitable for use in a reintroduction program. Captive breeding programs or survival assurance colonies that intend to reintroduce amphibians to the wild should maintain those animals in permanent isolation (e.g., dedicated rooms or buildings) away from amphibians that originate from outside the native range of the species.

Husbandry practices such as the use of dedicated footwear, protective clothing, dedicated tools and equipment, and following specific work‐flow patterns reduce the risk of introducing non‐native pathogens to amphibian collections. Facilities located within the natural range of the species and that do not keep amphibians from outside the natural range are the best example of permanent isolation and require the least amount of expense and effort (Pessier and Mendelson, 2010). See A guide to husbandry and biosecurity standards required for the safe and responsible management of ex situ populations of amphibians and Manual For Control of Infectious Diseases in Amphibian Survival Assurance Colonies and Reintroduction Programs for additional information about maintaining amphibian populations in biosecure conditions.

Research in 2012 by Crawford et al. used a DNA barcoding approach to survey mitochondrial DNA variation in captive populations of 10 species of Neotropical amphibians maintained in an ex situ assurance program, and found that three of ten species harbored substantial cryptic genetic diversity within the ex situ populations, and an additional three species harbored cryptic diversity among wild populations, but not in captivity. Ex situ conservation efforts focused on amphibians are therefore vulnerable to an incomplete taxonomy leading to misidentification among cryptic species, and a complete phylogenetic analysis of the species in the wild should be carried out, to understand what the functional unit you wish to conserve is. See DNA barcoding applied to ex situ tropical amphibian conservation programme reveals cryptic diversity in captive populations, for more information.

In addition to these model programs, AArk monitors other ex situ conservation programs for species assessed during an Amphibian Conservation Needs Assessment as needing urgent ex situ rescue or research, and similar programs in countries where an AArk conservation needs assessment has not yet been carried out. The results of all conservation need assessments can be viewed on the Assessment Results page of our web site.

Amphibian Ark commends these ex situ amphibian conservation programs as some of those which are based within the range country of the species, and maintain the populations in isolation from other amphibian populations occurring outside the range.