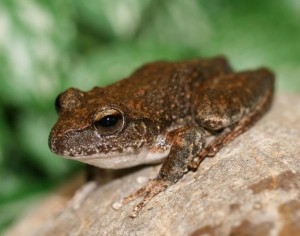 Distribution: Western slopes of the Great Dividing Range in NSW and Victoria, Australia.

Habitat: This species is a rocky stream-dwelling frog, living amongst areas of stream with bedrock or cobblestone.

Reproductive behaviour: This species deposits its eggs in the stream between cracks in the bedrock or amongst the cobblestones. They survive in the stream as free-living tadpoles until they metamorphose during the summer. 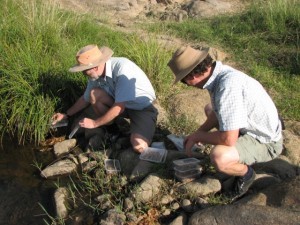 Interesting natural history notes: This species is relatively short-lived, with a typical lifespan of less than 4 years. With increasing drought and stream drying, this poses a greater risk to local populations of this species.

In situ projects currently underway: Currently, the existing populations are being monitored by the NSW Department of Environment, Climate Change and Water and habitat restoration work has taken place. Reintroduction programs are being undertaken.

Ex situ programs: Two geographical populations have been established at Taronga Zoo, Sydney (www.taronga.org.au) with an additional population at the Amphibian Research Centre (www.frogs.org.au). A reintroduction program is in place, in addition to research on immunity to chytrid fungus.

How can we help this species? For those living within the native range of the species, protecting the remaining habitat and restoring the riparian vegetation will aid the recovery of this species.