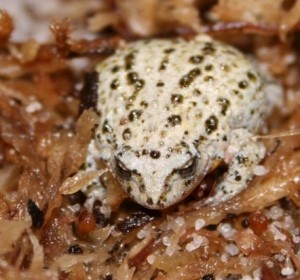 Reproductive behaviour: Terrestrial breeders that exhibit direct development. Males call from burrows in the substrate (usually under litter, moss, or other vegetation) during spring or early summer, and 10-12 eggs per clutch (on average) are laid in these burrows. There is no parental care. The eggs hatch and larvae develop and metamorphose within the jelly associated with the egg mass, with no free-swimming or feeding stage. 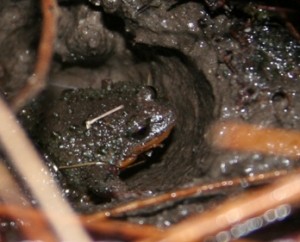 It is also highly sedentary; 95% of adult males included in a study moved less than five metres between seasons within a year, and less than twenty metres between years. This means that there is little potential for dispersal between populations, which has implications for gene flow and the capacity for the natural re-establishment of populations that die out.

Ex situ programs: The Native Species Breeding Program at Perth Zoo is currently conducting a head-start program with this species (i.e. collecting egg nests from the wild and rearing the individuals through until approximately eight months post-metamorphosis prior to releasing them back into the wild), and is aiming to expand this into a captive breeding program.

How can we help this species? People can help G. vitellina by only using dedicated roads and tracks in Blackwood River National Park, and avoiding the riparian habitat used by the species, and by observing fire bans. People living close to this national park could also raise awareness of the species locally.