Unlike many of the previous amphibian advocates I am very much a new face on the scene! I currently have the privilege of advocating for one of the world’s most unusual amphibians, an apex predator in its own right, and all in all a general oddity, not least because of its name! The Mountain Chicken (Leptodactylus fallax) has been one of those species that many have looked towards as a case study for the devastating impact that introduced invasive species can have on an ecosystem. This species has suffered one of the most well-documented and rapid declines of any vertebrate in recent times, as a direct result of the introduction of the deadly amphibian chytrid fungus Batrachochytrium dendrobatidis (Bd) to its native habitat. In the past I had studied the species, yet I hadn’t dared to dream I would have the opportunity to work with them, let alone to be a part of their reintroduction back to the island of Montserrat, in the Caribbean! 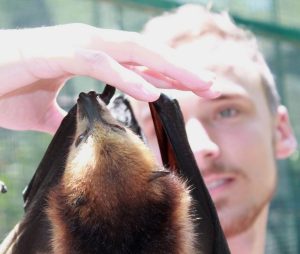 I was that child drawn to everything weird, wild and wonderful - obsessed with zoos, wildlife documentaries and the beautifully diverse myriad of creatures they contained.

Like many of you reading this, I was that child drawn to everything weird, wild and wonderful – obsessed with zoos, wildlife documentaries and the beautifully diverse myriad of creatures they contained. It wasn’t until I was introduced to the books of Gerald Durrell that my passion and excitement found a channel. Up until this point I hadn’t really been exposed to wildlife conservation as a concept that an individual could have a significant impact upon, let alone a career that one could pursue. Reading his books was like a call to action! They focused my passions and gave me the courage I needed to pursue something that I believed to be truly valuable. They gave me hope for the impact that a single individual could have!

The inspiration I garnered from Durrell’s books led me to pursue a BSc in Animal Science, at the end of which I was fortunate enough to be offered a position working and studying in Mauritius on my PGDip in Endangered Species Recovery with The Durrell Wildlife Conservation Trust and the Mauritian Wildlife Foundation, both of which had been founded by the man that had inspired me all those years ago.

My PGDip was my first true taste of fieldwork, living and working in situ. Flying out to Mauritius I spent eight months working within the Mauritian Wildlife Foundation on a wide array of wildlife conservation projects and initiatives. These varied hugely in their approach and utilized a variety of tools in the conservationist’s arsenal; from the more traditional methods such as captive breeding programs, habitat manipulations and management and invasive species control through to the pioneering use of analog species and their role in whole ecosystem restoration projects. All of this fieldwork was supplemented with Durrell-led lectures, from inspirational and world-renowned conservation biologists such as Carl Jones, Nik Cole and John Ewen. It was whilst studying in Mauritius that I fully realized a passion for creatures of the herpetological variety. How could you not, with the beautifully vivid Mauritius Ornate Day Gecko (Phelsuma ornata) tucked into every nook and cranny of the field stations, or after having had the privilege to work with one of the world’s rarest and most elusive snakes the Keel-scaled Boa (Casarea dussumieri)?

I left Mauritius filled with inspiration and aspirations. The PGDip had opened my eyes to the more human side of wildlife conservation projects, the needs of local people, employees and the impacts that exceptional leaders can have in recruiting others to their vision. With this in mind I accepted a lecturing position in Animal Management at West Midlands Safari Park in the United Kingdom, during which time I developed several modules including wildlife conservation and team management, and hopefully pushed a few more individuals towards pursuing a career in conservation. The role also helped me to develop skills in community outreach and public engagement, experiences that have proven to be priceless when it comes to the level of community engagement required of a re-wilding project such as the Mountain Chicken Recovery Program.

Which brings me to where I am now! Working for The Durrell Wildlife Conservation Trust on the Mountain Chicken Recovery Program, a multi-institutional partnership of zoos and government organizations, we are working to combine the knowledge gained from ex situ conservation work and research to inform and develop an in situ re-wilding strategy for the species. This has involved the development and adaptive management of environmental solar heating initiatives, establishing a native insect breeding facility on the island, as well as a whole array of surveys and public outreach initiatives. All of which is gearing towards the creation of a “SAFE haven” (SAFE = Saving Amphibians From Extinction) for the Mountain Chicken within its native environment. A SAFE haven that doesn’t isolate the Mountain Chicken from the Bd fungus but rather aims to facilitate its adaptation to the presence of Bd within the environment.

Our collective ambition is to not only have self-sustaining populations of Mountain Chickens returned to their former range, surviving alongside the disease that almost caused their extinction, but also to develop a new tool for the conservationists’ arsenal, one that will allow us to manage amphibian populations in situ at risk of extinction due to Bd.