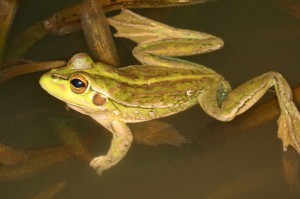 Habitat: This species is found in ponds, wetlands and slow-moving streams with grassy overhanging banks or abundant marginal growth of bulrushes and other vegetation. 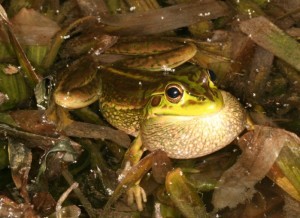 Threats to survival: It appears that this species declined rapidly due to chytrid fungus. Other threats include habitat clearing and introduced fish.

Reproductive behaviour: The male frogs call at night from open water or amongst the emergent vegetation. No other information has been recorded on its breeding behaviour.

Interesting natural history notes: This species was thought to have disappeared for over 30 years until it rediscovery in late 2009. Despite the fact that this species is primarily nocturnal, the Yellow-spotted Bell Frog, like other members of the bell frog group, will often bask in direct sunlight during the day from open positions.

In situ projects currently underway: Currently, the remaining population is being monitored by the NSW Department of Environment, Climate Change and Water. A reintroduction program is planned to take place once the captive individuals mature and commence breeding.

Ex situ programs: A small population has been established at Taronga Zoo, Sydney (www.taronga.org.au). The frogs will soon be bred and used for experimental reintroductions to establish additional populations.

How can we help this species? As this species is only currently known from one small population, supporting the reintroduction program will ensure that additional populations can be established.