Addressing the amphibian extinction crisis represents the greatest species conservation challenge in the history of humanity. One third to one half of all amphibian species are threatened with extinction, with probably more than 120 already gone in recent years. The IUCN Global Amphibian Assessment has alerted us to the fact that hundreds of species face threats that cannot be mitigated in the wild, they require zoos and other ex situ (captive) organizations to save them in the short term until adequate conservation measures to secure wild populations can be developed. Comparable calls to action are included in other IUCN documents. 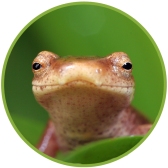 The World Association of Zoos and Aquariums (WAZA) has joined with two branches of the IUCN Species Survival Commission (IUCN/SSC) – the Conservation Planning Specialist Group (CPSG) and the Amphibian Specialist Group (ASG) – to form the Amphibian Ark (AArk). Since 2006 the Amphibian Ark has been helping zoos and aquariums to address the captive components of the Amphibian Conservation Action Plan, saving as many species as possible by providing global coordination, species prioritization, technical guidance, training, necessary linkages to other IUCN groups, communications, and guiding publicity and capital campaigns.

The AArk vision is the world’s amphibians safe in nature, and the mission is ensuring the survival and diversity of amphibian species focusing on those that cannot currently be safe-guarded in their natural environments. The AArk coordinates captive programs implemented by partners around the world, with the first emphasis on programs within the countries where the species occur in the wild, and with a constant attention to the obligation to couple captive conservation measures with necessary efforts to protect or restore species in their natural habitats. 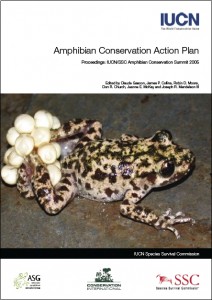 Without immediate captive management as a stop-gap component of an integrated conservation effort, hundreds of species will become extinct. This conservation challenge is one that we, the captive community, are uniquely capable of addressing. Never before has the conservation community at large charged zoos and aquariums with a task of this magnitude. This is an opportunity for every zoo and aquarium, regardless of size, to make a vital conservation contribution, and for our community to be broadly acknowledged as a credible conservation partner. Supporting this call to action is clearly within the financial capacity of all zoos and aquariums, and engages the diverse expertise found within all institutions. Our goal is 100% participation of WAZA zoos and aquariums and the regional associations. If we do not respond immediately and on an unprecedented scale, much of an entire vertebrate class will be lost, and we will have failed in our most basic conservation mission as defined in the World Zoo and Aquarium Conservation Strategy.