We were formed to address the captive (ex situ) components of the Amphibian Conservation Action Plan.

Our vision is the world’s amphibians safe in nature, and our mission is ensuring the survival and diversity of amphibian species focusing on those that cannot currently be safe-guarded in their natural environments.

We coordinate amphibian conservation programs implemented by partners (zoos, aquariums, museums, universities and private conservationists) around the world, with our primary emphasis on programs within the range countries of the species, and with a constant attention to our obligation to couple captive conservation measures with necessary efforts to protect or restore species in their natural habitats.

An AArk Steering Committee, with Executive Co-Chairs from each of the three principal partners, provide strategic guidance on the activities of the AArk and ensure excellent communication with all stakeholders.

A number of dedicated positions coordinate all aspects of implementation within the AArk initiative; assist AArk partners in evaluating the conservation needs for amphibian species and regions for captive conservation work; lead development and implementation of training programs for building capacity of individuals and institutions; and develop communications strategies, newsletters and other messages, and materials to promote understanding and action on behalf of amphibian conservation.

Advisory Committees have been formed to consult on species-specific issues, for example, reintroduction, gene banking, and veterinary, legal, and ethical concerns. 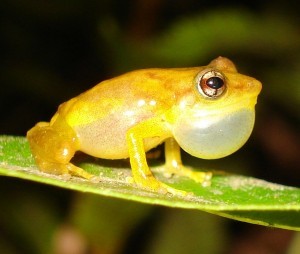 It is not the goal of AArk’s programs to collect animals from the wild purely for exhibit in zoos or aquariums. In fact, that is the last thing we want, and as an end point, it would represent complete failure of the program. Although the proximal action to save critical species from immediate extinction will be sending them to the nearest existing facilities with available space and resident expertise, the ultimate goal is to enable the range countries currently lacking facilities and expertise to care for their own species. This will allow outside experts to free up their time and space to begin the process anew with other species in other regions of the world.

These two activities – rescue and capacity building – must occur together or at least sequentially. If outside institutions allow themselves to become inundated with specimens from their initial efforts, they will be unable to do anything meaningful elsewhere and we will fail to reach our primary goal. Successful amphibian conservation will be achieved when a given species is sustainably managed by its own range country experts and there is no longer a need for outside institutions to hold any specimens of that species. Ultimately, every region should only have to manage their own species, although tropical regions might continue to require help from temperate regions due to overwhelming volume versus infrastructure resources.