Amphibians as indicators of environmental health and their contribution to humanity 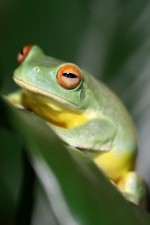 Amphibians profoundly enhance our lives and our world in countless ways. They provide vital biomedicines, including compounds that are being refined for analgesics, antibiotics, stimulants for heart attack victims, and treatments for diverse diseases including depression, stroke, seizures, Alzheimer’s, and cancer. The Australian red-eyed tree-frog (Litoria chloris) and relatives give us a compound capable of preventing HIV infection, the cause of AIDS.

Amphibians’ thin skins help them drink and breathe, but also make them susceptible to environmental contaminants, particularly agricultural, industrial, and pharmaceutical chemicals. For example, atrazine is the most widely used herbicide in the US with an estimated 61 to 73 million pounds used per year during the 1990s. Scientific studies have found that atrazine may cause a variety of cancers and act as an endocrine disruptor, mimicking the feminizing hormone estrogen and harming human and animal reproductive and hormone systems. Atrazine is generally applied in spring and can accumulate in amphibian breeding pools. Laboratory studies have shown that atrazine can chemically sterilize tadpoles at levels well below the EPA maximum allowable level for drinking water.

Other organochlorine pollutants (e.g., DDT, PCBs, dioxins) can also act as endocrine disruptors, inducing similar feminizing effects in amphibians. It has been demonstrated that these responses are occurring in nature, but it is yet unclear what long-term effect they will have on wild populations.

Amphibians have been likened to canaries in the coal mine: just as miners used sensitive canaries to warn them of toxic gases in the mines, amphibians might be warning us of unsafe environmental conditions that could eventually seriously impact our health. Could we be similarly affected by these widespread endocrine disruptors, or are we already? Atrazine, for example, has been detected in more than 1 million Americans’ drinking water at levels higher than EPA’s drinking water standard. Some human studies suggest that the average sperm count of adult men in certain populations is significantly decreased, as much as 50% of what it was two generations ago. Are we also suffering the same feminizing effects of agrochemicals, industrial waste, and other estrogen-mimics that we see affecting amphibians so drastically? 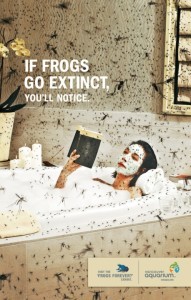 Amphibians are also vital components of their ecosystems. In the 1970s, it was discovered that the northern redback salamander (Plethodon cinereus) was possibly the most abundant vertebrate in eastern US forests, exceeding the biomass of all the bird or mammal species combined. Amphibians feed primarily on insects and other invertebrates. It was estimated that a single population of ~1,000 cricket frogs (Acris crepitans) could consume almost five million invertebrates in one year. Clearly they serve as significant predators of small invertebrates, as abundant prey for larger predators, and as a vital link in the food web between the two. In areas of the world where amphibians have declined, there has been an increase in invertebrate pests that damage crops and that carry human diseases.

Amphibians have also played a vital role in human culture. While in some cultures frogs and toads have been despised and regarded as evil, other cultures have embraced them as life-giving keepers of the rains or agents of fertility and good luck. Some simply use them for food. Amphibians have been both cherished and persecuted by different cultures as characters in fantasy stories, ingredients in folk medicine, and as spiritual beings.