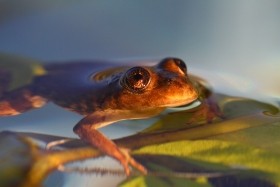 Without immediate captive management as a stopgap component of an integrated conservation effort, hundreds of species could become extinct. Because the resources available to zoos and aquariums are limited, the Amphibian Ark must try to identify which species require captive rescue and management most urgently. Nearly 400 species have been assessed as being in need of urgent rescue, during national or regional assessments – these are species that still exist in the wild, but the threats being faced by them cannot or will not be reversed in time to prevent likely species extinction. Threats that constitute imminent danger of extinction include threats for which we currently have no remedy (e.g. chytrid fungus, including any species known or suspected to be susceptible, climate change, including any species documented to be drastically contracting its range, e.g., mountaintop salamanders in Central America (per Wake et al.) and mountaintop frogs in Madagascar (per Raxworthy et al.)) or threats for which we have a remedy but not the resources or will to intervene (e.g. imminent destruction of more than 50% of habitat by dam construction, mining/pollution etc., or species collected to brink of extinction).

The AArk Conservation Needs Assessment process has been used to generate over 3,700 assessments for more than 3,100 unique species (38% of the currently-known species), in 42 different countries. Several more country-wide assessments are presently underway. The results of all assessments are available in our online assessment program, with a specific report which provides details on species recommended for ex situ rescue. Additional assessments are planned for other countries and regions over the coming months. The benefits of this assessment process are clear – we assemble the leading amphibian field experts in each region, to collectively determine the best course of conservation actions to help prevent the extinctions of threatened amphibian species in nature. These actions include habitat restoration and preservation, threat mitigation, captive breeding for release and community awareness and involvement.

AArk strongly recommends that rescue programs are established within the range country of the species wherever possible. Zoos, aquariums and other captive breeding organizations that are considering the implementation of new amphibian rescue programs are strongly encouraged to consider the following species, which have all been recommended for urgent rescue programs via Conservation Needs Assessments. Information regarding the likely availability of founder animals and the completion of a relevant phylogenetic study is included where known. Such additional information may indicate which species are currently appropriate for captive rescue programs, and those which may benefit from additional research in the wild prior to a captive program being established. Species expected to have wild founders available and which have undergone a phylogenetic review should perhaps be considered ahead of others where information is incomplete.

We attempt to monitor the progress of all known ex situ rescue programs in our Progress of Programs database, which follows a series of key steps in the implementation and ongoing management of ex situ conservation programs.