Ex situ research plays an important role in amphibian conservation, especially developing husbandry and breeding techniques and protocols for species where little is known of their captive requirements. The skills gained by working with these husbandry research species, or “analog” species can then be applied to closely related, but more threatened species that have been recommended for captive rescue or assurance populations. 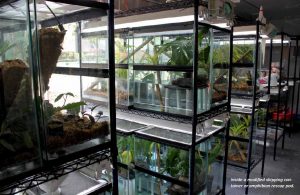 The AArk Conservation Needs Assessment process has been used to generate over 4,168 assessments for more than 3,510 unique species (40% of the currently-known species), in 48 different countries. Several more country-wide assessments are presently underway. The results of all assessments are available in our new online assessment program, and species which have been recommended for ex situ husbandry research can be found by running the National Recommended Conservation Actions report. Additional assessments are planned for other countries and regions over the coming months. The benefits of this assessment process are clear – we assemble the leading amphibian field experts in each region, to collectively determine the best course of conservation actions to help prevent the extinctions of threatened amphibian species in nature. These actions include habitat restoration and preservation, threat mitigation, captive breeding for release and community awareness and involvement.

Zoos, aquariums and other captive breeding organizations that are considering the implementation of new amphibian research programs are strongly encouraged to consider the following species, which have all been recommended for ex situ research programs via Conservation Needs Assessments.