AArk has offered grants since 2009, and in the past twelve years, we have provided funding totaling almost US$204,000 to forty-three projects in twenty-two countries. We offer a range of grants, including start-up grants, which provide initial funding to help newly-launched projects get started at the very beginning of their life; start-up grant extensions, which are additional funds, available to provide continued support for AArk seed or start-up grant projects that have met their stated objectives over the previous year; workshop attendance grants providing partial funding to assist attendance at ex situ amphibian conservation-related workshops; and mentorship grants, which support organizations that have previously received an AArk seed or start-up grant, to bring in a designated outside expert to assist with an aspect of their amphibian conservation efforts. We are excited to announce our 2021 conservation grant winners – two start-up projects (US$5,000 each, based in Iran and Peru).

Details of all of our grants, including guidelines and deadlines for lodging applications, can be found on the Conservation Grants page.

The successful projects this year are: The Critically Endangered Persian Mountain Salamander (Paradactylodon persicus gorganensis) is an endemic cave salamander in Iran which is found within the Hyrcanian forest in Golestan province, northern Iran. It has a very restricted distribution range. The subspecies was previously known as a full species, but recently based on the two taxonomic studies (Stock et al., 2019; Ahmadzadeh et al., 2020) defined as subspecies. Tourism and habitat destruction are the main threats for the species so far, but it will also be valuable to evaluate the populations of this taxon for the Bd pathogen. In addition to being a source of income for locals, tourism creates many environmental problems. Tourists do not observe the cleanliness of the environment and leave a lot of garbage to in the area during their visits. Tourists swimming in the pools created in the forest can also transmit various fungal agents to the area, which is dangerous for the salamanders as well as other amphibians.

This project will establish an urgent rescue program for populations of Persian Mountain Salamander in two stages: as captive husbandry at natural controlled ponds in the Hyrcanian Forest; and through captive breeding in laboratory controlled aquaria at the Institute of Biological Science at Damghan University.

Objectives for the first year are:

The effectiveness of the project will be evaluated after one year. The IUCN Red List assessment will be updated and the map for new ponds will be provided to the agencies. Videos and printed brochures about the conservation program will be developed to increase the public awareness about this issue.

The project is planned for three years, and we will continually monitor it during this period. After completion of project all ponds and released specimens will continue to be monitored and threats around the ponds will be reviewed, to evaluate the success of the project. 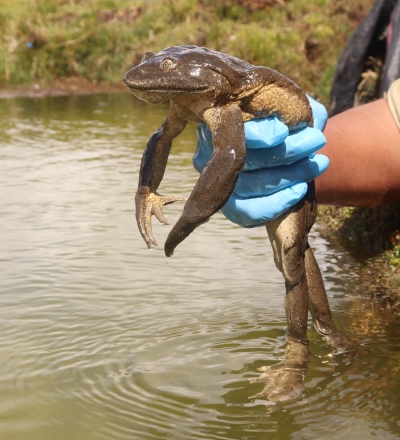 The Lake Junín Frog (Telmatobius macrostomus) is endemic to Peru. According to the IUCN Red List and national legislation it is endangered, and in recent decades the population has reduced dramatically (by more than 95% since 1950 according to own calculations) due to the illegal trafficking of the species, the presence of the invasive Rainbow Trout (Oncorhynchus mykiss), the degradation of habitat and the lack of a technical center for the breeding of the species. Given these threats, ex situ conservation measures are necessary to reintroduce individuals to safe natural habitats and to reinforce existing populations. We propose the formation of a breeding and research center in the district of Ninacaca within the Junín National Reserve, which has an existing infrastructure (catchment channel, waste control grid, breeding ponds and space for a laboratory). We already have an agreement with Jesús Espinoza, a local resident that the space where the project will be carried out would be available.

The initial population will be twelve tadpoles and six adults collected from the natural environment, and individuals confiscated by the Peruvian Government from illegal farming and hunting operations. We will work with this relatively small number of animals initially, to learn how to raise them and see if we can get them to reproduce, without damaging the current wild population unnecessarily. Should the breeding be successful with these initial pairs, the goal is to increase the number to ensure healthy genetic viability in the Conservation Center.

All individuals will undergo a quarantine and a complete examination including treatment for chytridiomycosis. This site will additionally provide opportunities for studies of habitat quality, food availability and training resources for the local citizen science project “Guardians of the Chinchaycocha frogs” under the direction of Denver Zoo, USA and the NGO Grupo RANA. The animals will be reared in natural pools meeting the required water chemistry parameters, hoping that greater than 50% of the tadpoles and confiscated individuals will develop properly. As the breeding program succeeds, half of the reared individuals will be released, when they reach stage 36 per Gosner, in the local monitoring sites, rehabbed sites devoid of threats, sites within the territory and buffer zones of national protected areas, and those that are part of the citizen monitoring program. The remaining frogs will remain in captivity to ensure the success of the project. The ex situ conservation facility will work with the rural communities, Denver Zoo, Junín National Reserve, the Amphibian Survival Alliance, local governments and communities, the Peruvian University Cayetano Heredia and the Municipality of Ninacaca.

We currently have a community monitoring program in partnership with the Denver Zoological Foundation called “Guardians of the Chinchaycocha frogs” which trains the local population in the monitoring and conservation of this amphibian. The objective of this project is to conserve the population of Lake Junín Frogs through ex situ efforts. We propose to strengthen the existing artisanal breeding center located within the geographic distribution area of the species, through the implementation of a laboratory and strengthening of the technical and conservation capacities of the local population which today manages the center and with whom we have an agreement and our community monitoring program.

The anticipated results for this project are to: