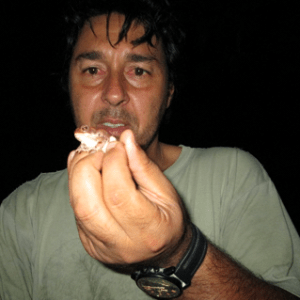 Luis Carrillo started working in zoos back in 1994 in his native Venezuela as head veterinarian at the Caricuao Zoo in Caracas. From there, he has had the opportunity to receive training both as a wildlife veterinary clinician and also as a biologist. Having worked formally in Venezuela, Colombia and Mexico, Luis now resides in Mexico where he has worked in various zoos including Zoofari, a safari park zoo that currently host him.

Since 2005, Luis has also worked with the Conservation Planning Specialist Group (CPSG/SSC/IUCN) Regional Network Mexico and since 2012, has been the regional representative for Mexico with the main role of organizing and facilitating conservation workshops for many species in the Latin-American region.

By 2008, the Year of the Frog, Luis was appointed as Amphibian Group Coordinator for the Latin American Zoos Association, a position that he still holds today. Luis also started training in amphibian conservation and management through the Association of Zoos and Aquariums course and then eventually through training courses and professional visits to conservation projects and private collections. With a background in veterinary medicine, Luis was recruited by Amphibian Ark to help in translation of key amphibian veterinary documents and lectures and also to be an instructor at training courses in Latin America. He is also an active member of the Amphibian Veterinary Outreach Program.

Luis has worked with Amphibian Ark assisting in the organization, development, facilitation and/or as lecturer of many AArk’s Conservation Needs Assessment workshops and amphibian biology and management courses in Latin-America.