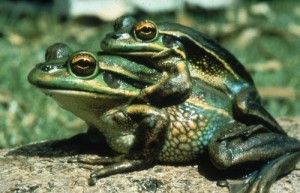 Habitat: This species is most often associated with ephemeral or permanent ponds. Some remaining population inhabit greatly disturbed areas.

Reproductive behaviour: This species is quite fecund. They have been known to lay up to 11,682 eggs, though the average is estimated to be 3,700. 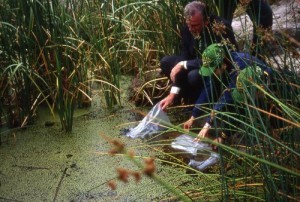 Interesting natural history notes: The Green and Golden Bell Frog was one of the most common species in south-eastern Australia before their rapid and continuous decline.

In situ projects currently underway: Population monitoring and protective measures have been undertaken at a number of extant sites.

Ex situ programs: Insurance populations have been established at Taronga Zoo, Sydney (www.taronga.org.au) and Newcastle University. Both institutions have conducted reintroduction programs for this species.

How can we help this species? As this species is often found in urbanised areas, one can help by ensuring pets are locked away at night and not using pesticides or herbicides near potential habitat.