AArk has offered grants since 2009, and in the past eleven years, we have provided funding totaling just over US$194,000 to forty-one projects in twenty-one countries. We offer a range of grants, including start-up grants, which provide initial funding to help newly-launched projects get started at the very beginning of their life; start-up grant extensions, which are additional funds, available to provide continued support for AArk seed or start-up grant projects that have met their stated objectives over the previous year; workshop attendance grants providing partial funding to assist attendance at ex situ amphibian conservation-related workshops; and mentorship grants, which support organizations that have previously received an AArk seed or start-up grant, to bring in a designated outside expert to assist with an aspect of their amphibian conservation efforts. Details of all of our grants, including guidelines and deadlines for lodging applications, can be found on the Conservation Grants page.

Of the thirteen applications received, we are excited to announce that we are able to fund three start-up projects (US$5,000 each, based in Ghana, India and Venezuela), US$4,000 for a start-up extension grant based in Argentina, and US$1,500 for a mentorship grant for capacity-building in Uganda. The successful projects this year are: 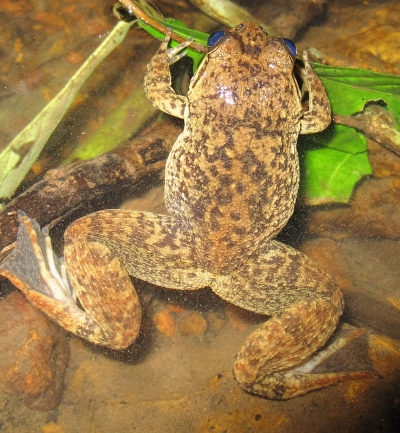 The Critically Endangered Togo Slippery Frog (Conraua derooi) is an Evolutionarily Distinct and Globally Endangered (EDGE) amphibian (www.edgeofexistence.org/species/togo-slippery-frog/). The species is known from two localities in Ghana: the Togo-Volta highlands, which is along Ghana’s border with the Republic of Togo and the Atewa Hills, one of the last upland evergreen forest in Ghana. The Atewa population is however recognized as a distinct species and a paper is currently being completed to name it (Blackburn et. al.,in review). It is feared that this distinct frog will become extinct even before it is named due to a planned bauxite mine in the Atewa Hills to repay loans secured from China. In late 2019, the bulldozers moved in to reopen roads and national security operatives secured the main entrances to the reserve. A recent map of the proposed mine coincides directly with the slippery frog’s habitat and it is highly unlikely that this Atewa endemic frog has any chance of survival should the government proceed with its plans to mine the reserve in December.

The goal of this project is to save the distinct subpopulation of the Togo Slippery Frog in the Atewa Hills. We propose to establish an ex situ conservation program in collaboration with the Forestry Research Institute of Ghana (FORIG) and Fisheries and Aquaculture Department of the Kwame Nkrumah University of Science and Technology (KNUST).

We have been studying this frog in the wild for the past ten years. Therefore, we already have a fair amount of understanding of its habit requirements. Notwithstanding, we plan to conduct additional field visits with one of our collaborators from the London Zoo to gather additional habitat parameters. We believe this will help us to construct the breeding facility to mimic their natural habitat. 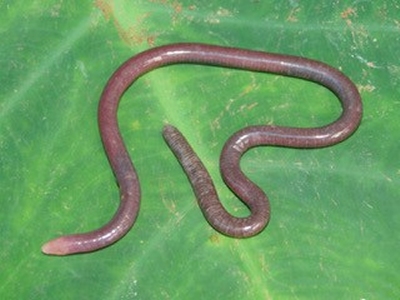 The indotyphlid caecilian Gegeneophis tejaswini (discovered and described by the applicant in 2015) has a small, fragmented distribution within human-inhabited areas in the foothills of the Western Ghats, within 20 km of the applicant’s institution. The major threats to the species are a lack of knowledge of the species’ basic biology and widespread urbanization and intensification of agriculture. The planned captive breeding program will (1) generate valuable new knowledge on the species’ biology, and (2) establish and develop capacity and expertise for captive maintenance and breeding of Indian caecilians in India.

The applicant has maintained live caecilians since 2016 in a rudimentary facility, and approximately forty individuals are currently present including larvae, juveniles and adults from all three genera occurring in the region. The new ex situ facility will be built as per international husbandry standards and specific caecilian requirements, by vastly improving the current rudimentary setup. The project will build new knowledge on the husbandry of Indian caecilians in general and G. tejaswini in particular. It will generate novel data on the behavior, ecology, reproduction and physiological requirements of G. tejaswini, which otherwise are very difficult to obtain due to its highly subterranean life.

The project will be the first focused, dedicated captive breeding attempt for any Indian caecilian species (none of which are maintained in zoos in the Western Ghats region), and is expected to generate data also on other sympatric caecilian species. New data will help the applicant to write improved conservation status assessments and in situ and ex situ conservation management plans. The project will build and/or cement collaborative links with ZSL London Zoo and the Natural History Museum, London. The new facility will foster the husbandry component of the applicant’s planned caecilian conservation work in the coming decade. 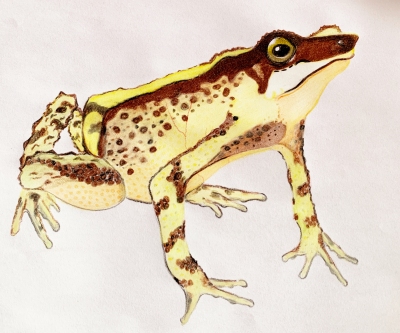 Atelopus oxyrhynchus has been “lost” for more than three decades. It was not only the first Venezuelan harlequin frog described, but also the first in disappearing from the record by the late 1980’s. Our recent finding of many tadpoles in a pristine mountain stream in the Merida Andes rises hope to rescue the species. We rescued the larvae from water pools that in the same day desiccated due to intense dry regional weather conditions. Tadpoles present signs of chytridiomicosis which, added to the climate risk, suggest that a captive husbandry program is mandatory for this Critically Endangered species. Additionally, the locality lies adjacent to a National Park, and close to the city of Mérida, posing an interesting case where the local community, official institutions, researchers and other key actors can interact to get a better conservation scenario for the emblematic frog that can be a flag or umbrella species to protect other amphibians and their environments.

Goals for the project: 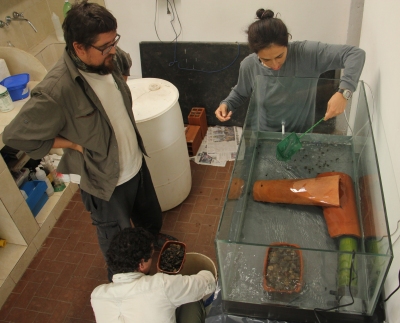 The Banderita Marsupial Frog (Gastrotheca gracilis) is the southernmost species of marsupial frogs. This species was missing for twenty years, but the rediscovered populations are facing new threats. Despite the success in the implementation of the population supplementation program for the Banderita Marsupial Frog, the conservation status of this endangered species is still a matter of concern. Therefore, we propose making an upgrade of the existing facilities in the Reserva Experimental Horco Molle for the development of an ex situ research program to reach the entire cycle of captive breeding of this threatened marsupial frog species. Also, we will continue the supplementation program of G. gracilis’ population in the Reserva Provincial Los Sosa and we will establish an intensive search program focused in detecting the presence of this endangered species in the northern distribution range where it is missing for nearly thirty years.

During the second reproductive season of 2019/2020, we continued with the supplementation program of Banderita Marsupial Frogs in the Reserva Provincial Los Sosa with a successful release of a second cohort of forty-six froglets into the wild. In this opportunity, the release of the froglets was made with the support of the environmental authorities of Tucuman province government. As a result of these two consecutive experiences of rearing tadpoles and juveniles in captivity, we compiled the obtained information in the Husbandry Guidelines for this threatened species.
During the coming year we propose to upgrade the existing facilities of the Reserva Experimental Horco Molle to develop the ex situ research program. The improvements of the facilities will be destined to reinforce the biosecurity levels and to condition space for the raise of live food supply for the frogs. In addition, we will install a permanent glass window for providing the frogs a natural light cycle. Also, the breeding facility will be included in daily guided trail of Reserva Experimental Horco Molle, so that visitors can learn about this project. 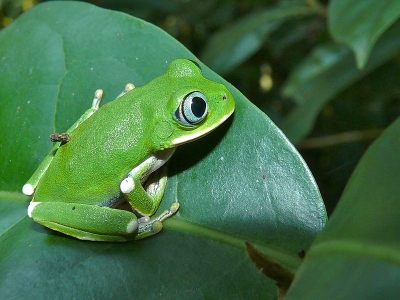 The project will install equipment needed to setup basic amphibian breeding facilities at Uganda Wildlife Conservation Education Centre (UWEC ZOO), identify one or two common, local amphibian species (most likely Leptopelis kivuensis) that zoo keepers can work with as surrogate species for Leptopelis karissimbensis which is threatened due its declining populations in the wild.

Ian du Plessis, Curator: Reptiles, Fish and Amphibians from Johannesburg City Parks and Zoo in South Africa, will be our mentor and he will guide our staff in the process of selecting appropriate species, determining which equipment will be needed to house the species, and consequently to provide hands-on-training for amphibian keepers at the Uganda Wildlife Conservation Education Centre and other Ugandan amphibian scientists as shall be identified.

The overall outcomes of this project are: